Typical examples where 10mm thick material cannot be used are:

Reflectance level and diffuse reflectance quality depends on material properties, surface conditions and thickness. Any mechanical abrasion of the surface may result in gloss reflections. Also, absorption of volatile substances alters ODM98's reflective behavior. The adverse optical effects caused by surface contamination like grease (fingerprints) or oil are similar to those of other optical components. If the surface cannot be cleaned using distilled water (without pressure), material must be removed.

ODM98's optical stability under exposure to high power optical radiation irradiation is one deciding factor for its selection over other reflectance materials. Its fundamental long term stability results from the basic material itself, in association with a careful manufacturing process employing ISO 9001 certified Quality Management and has no real limitations. Quantitative data on UV resistance is only provisional, because of the many factors which actively influence practical applications. One test, as shown in the adjacent graph (picture 4 in the graphical specifications) shows an ageing test on an ODM98 reflection standard with a 420 W halogen-metal vapor lamp operating in the 250 to 400 nm wavelength range. Field reports involving applications using high-powered laser cavities and on-line fluorescence sensors confirm minimal ageing under exposure to UV.

The maximum permissible radiation flux density for ODM98 can, like many other parameters, only be described through particular examples.
In a series of tests an ODM98 reflection standard was exposed to pulsed laser radiation. The wavelength of the laser was 1064 nm, the focus diameter 200 µm, the pulse length 200 µs, the repetition rate 25 Hz and the mean power was 21 W. The peak power of 4.2 kW resulting from this, representing a radiation flux density of 13.3 GW/m2 did not yield any detectable alterations. Surface impurities were removed by the laser itself at the start of the test series.

Machining OP.DI.MA. is not difficult for those with some experience with processing plastics. All machining methods such as lathe work, drilling, sawing, milling, etc., are possible. See Block Material for Customer Processing for more information.

ODM98 is chemically inert, and is stable against acids, bases and other organic solvents. A special manufacturing process also gives it high mechanical stability. These properties mean that dust, for instance, cany be removed with paper tissues (lint-free, no pressure). Other impurities can be removed with water/alcohol mixtures or with methylene chloride or hexane (hexane is appropriate for organic impurities). When cleaning with solvents, these penetrate into the micro-porous (amorphous) structure of the plastic. After cleaning, which can, for instance, be carried out using solvent-soaked paper tissues, the plastic must be "baked" at a temperature near the solvent's boiling point. Scratches and "polished" areas which diminish the reflective properties can be removed by removing the top layer with fine-grained abrasive paper. It is recommended that calibrated reflection standards be re-calibrated after cleaning. 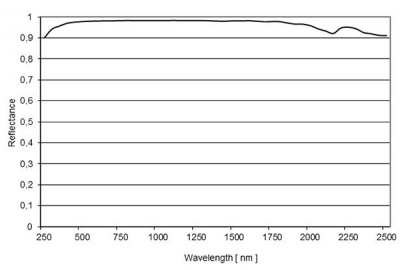 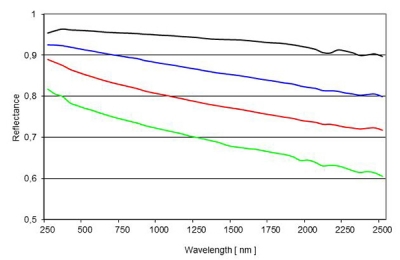 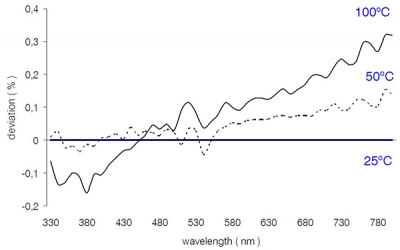 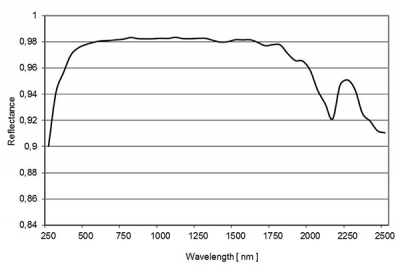 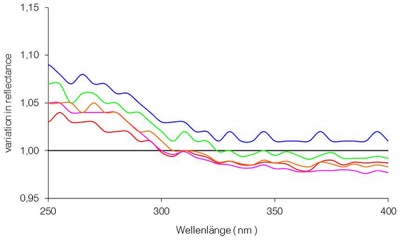 Typical changes in reflectance resulting from UV radiation with a 420 W halogen-metal vapor lamp ((ULTRATECH 400/OSRAM). (1) = Beginning of measurement, 2) = 15 min, 3) = 2 hrs. 4) = 5 hrs., 5) =7 hrs.. After about 100 hours of ageing the characteristic output was approximately reached. This result agrees with the research results from the NPL (UK) for this kind of material.